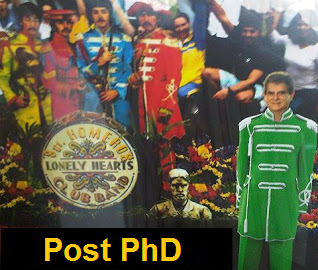 This is the fourth test on the topic!

If you know all 30,
(knew or learned)
and hit 5 of these new ones,
You take the title of Master!

31. To know which beatle song has a Brazilian voice

32. To know the only beatle song to be Grammy awarded 'Song of the Year'

33. To know which beatle song has a non-beatle lead vocal

34. To know what song happens in the American Old West

35. To know which LP has more George Harrison compositions

36. To know which record sold 13.5 million copies in a single month, decades after the band's demise

37. To know which song had the working title "The Void"

38. To know the first time the term 'Beatlemania' came up

39. To know in which George song Paul plays the guitar solo

40. To know who played bass guitar before Paul

31. To know which beatle song has a Brazilian voice


It is in the song "Across The Universe", composed by John. After some initial takes, Paul (always him) thought they needed a female voice to do the backing vocals, in the section "Nothing's gonna change my world ...", and went out into the street, the famous Abbey Road, found the bunch of women who were always on hysterical duty in front of the studio, and asked: “Does anyone out there know how to sing?". Two them of raised their hands, one of them was the Brazilian Elizabeth Bravo, who spent a season in London.

Recently, Lizzie commented on my post on the subject and disputed the adjective I used, but not the fact, that made her a Brazilian heroine. See here, in this link


32. To know the only beatle song to be Grammy awarded 'Song of the Year'


It's "Michelle", Rubber SOul, 1965. Paul's brilliant ballad, even using a few words in French, immediate worldwide success. It was the FIRST and ONLY song by the Beatles to win the Grammy for Song Of The Year ', and it was in 1967, look! Not even "Yesterday" had achieved the feat, a year earlier! Paul sang live, however, but he did it in the spectacular presentation in the White House in 2010, where he sang it looking at Michelle Obama, under the suspicious eyes of Barack ....

More on Rubber Soul at this link

33. To know which beatle song has a non-beatle lead vocal


... a few were aware of how bad the mood of the White Album recordings was, even because of Yoko Ono, whom John insisted on taking to the studio, obsessed that he was for her, even imposing her voice in a solo part, the only non-beatle in a Beatle song on "The Continuing Story of Bungallow Bill", okay it was his right, the song was his, but anyway, it got weird. And the thing would continue on the recordings of Get Back
Project, and culminating with the hospital bed that John installed in the studio to receive a convalescent Yoko ...

This is an excerpt from my post about the end of the Beatles, here, in this
link.


34. To know what song happens in the American Old West


It is "Rocky Raccoon", White Album, 1968, the funniest and most striking for me by Paul, who transported himself to the Wild West, describing the hardships of a cowboy fascinated by a prostitute and that tries to get revenge when he is betrayed, being notable its increasing crescendo of instruments and, of course, the spectacular honky tonky piano of the chorus, led by George Martin.

This is an excerpt from my post about the White Album, here, in this link.


35. To know which LP has more George Harrison compositions


Revolver is the first and only Beatle LP that has 3 songs by George Harrison: "Taxman" (complaining that the British tax authorities took 95% of their money), "Love You To" (Indian music's first foray into his work) and "I Want To Tell You". It was the most he had in his beatle career ... Well, he actually produced 4 songs on the White Album (1968), but as it was a double album, I consider it two per LP, so Revolver won!

This is an excerpt from my post about the album Revolver, here, in this link.


36. To know which album sold 13.5 million copies in a single month, decades after the band's demise


It was #1 in 2001, with the fastest sales in history, around the world, according to Guinness, containing all 27 Beatles songs that reached the top of the American chart.

This is an excerpt from my post on New Beatles, here, in this link

37. To know which song had the working title "The Void"


Day of recording of the album Revolver, 1966, Ringo had made a spectacular arrangement for a song by John called “The Void”, and in a chat with others about life, he uttered a phrase never spoken before: “Ah ... tomorrow never knows ... ”. Ready! "The Void" became "Tomorrow Never Knows" a revolutionary song, definitely marking the turning point of their career.

This is an excerpt from my post on Ringo, here, in this link.

38. To know the first time the term 'Beatlemania' came up


"I was then able to appreciate nouns such as phenomenon, madness, astonishment, hysteria, fainting, frenzy, panic, turmoil, savagery, rapture, commotion, uproar, turmoil, crowd, amazement, pandemonium, all tied to Beatlemania, state of spirit that affected the world as from October 13, 1963 when the term was first used by the English press, after a show at the London Paladium theater."

This is an excerpt from my post on the biography "The Beatles" by Bob Spitz, here, in this link


39. To know in which George song Paul plays the guitar solo


The magnificent "Taxman" (complaining that the British tax authorities took 95% of their money) had the primacy of opening a Beatle album, the only time that George had this honor. Incredible as it may seem, it is Paul who plays the magnificent guitar solo of the song (George went blank, after hours of trying to finish it).

This is an excerpt from my post about the album Revolver, here, in this link.


40. To know who played bass guitar before Paul


Two important facts happened during that season in Hamburg. The first was the departure of Stuart Sutcliffe from the band. Stu, after a performance in the Top Ten club, communicated to the other Beatles that he was leaving the band to live with Astrid, and would not return to Liverpool (Stuart enrolled at Hochschule, an art school in Hamburg, similar to the Liverpool College of Art, where he had met John Lennon). Upon leaving the Beatles, Stu handed his double bass to PaulaMcCartney, who he considered to be the most prepared beatle to play that instrument.

This is an excerpt from a post by my Guru Renato Quaresma on The Beatles in Hamburg, here, in this link