To Be a Beatlemaniac is ... 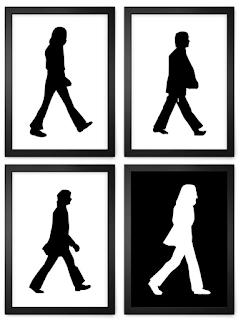 My Guru regarding the Beatles told me:

"Being a Beatlemaniac
is a state of mind
not to be measured in a quiz!"

However, as I don't have
a 'state of mind' meter,
I’ll proceed to the test!

Whoever answers 5 out of 10 points,
without consulting Google,
I declare Beatlemaniac!

The answers and references for all the statements below are at the bottom!
Maybe I'll be introducing some more in the future!!

To be a Beatlemaniac is:


1. To identify the four silhouettes of the above image without blinking!


2. To know who is lead singer in' Do You Want To Know a Secret?


3. To know who is the older Beatle


4. To know which Beatle plays the keyboard with his elbow


6. Think about George Martin and not remember books and series


7. To know the first album to show the lyrics of the songs


8. To know how many albuns have no Beatles images on the cover (during their career)


9. To know that Let It Be was not the last album recorded by the Beatles


10. To know which was the biggest income tax rate in England (HINT on a Beatle song)

Answers and References
How did you do?

1. To identify the four silhouettes without blinking

They are the 4 Beatles walking on the cover of Abbey Road, in the same order, obeying a Z shape, George, Paul, Ringo and John!

I talk more about the cover here, in this link:

2. To know who is lead singer in 'Do You Want To Know a Secret?’

It's George Harrison. On the Beatles' first LP, George didn't have any compositions yet, so John and Paul gave him that original Lennon/McCartney to shine! This would also be repeated in A Hard Day’s Night, the third LP, which only had originals by Lennon/McCartney, and George sang “I’m Happy Just To Dance With You”.

More about George, here, at this link:

3. To know who is the older Beatle.

I spoke about this here, on this link:

4.  To know which Beatle plays the keyboard with his elbow

In some live performances of “I’m Down”, magnificent rock of 1965, composed by Paul, John abandons the guitar and plays a keyboard, maddening the audience, and uses his elbow in the most solo parts. At the first of them, in Shea Stadium, New York, Paul laughs a lot!

See and hear here on this link:

Paul plays his bass adapted for lefties, with inverted strings and buttoms. I had to qualify the information because Ringo is also left-handed, but he plays a drums for righties.

I talked about it here, on this link

6. To think about George Martin and not remember books and series

Yes, for us the 'main' George Martin was the conductor of Abbey Road, who hired the Beatles and was of paramount importance in many recordings and innovations that revolutionized music, in addition to making classic arrangements for 'classics' like “Yesterday”, "Eleanor Rigby", "She's Leaving Home", the soundtrack for the movie "Yellow Submarine", and so many others. No, he is NOT the author of Game of Thrones.

More about Martin, here on this link

7. To lnow the first album to show the lyrics of the songs.

And it was not just the first Beatles album to show an insert with the lyrics, but the first album in the history of music to do that. It was “Sgt. Peppers Lonely Hearts Club Band ”, from 1967.

See more about this cover here on this link

8. To know how many studio albuns do not to have Beatles images on the cover (during their career)

Only ONE. It was the White Album, from 1968, which was done just to counter the 'a lot of information' from the previous LP, mentioned above. There was also nothing written in color, just the official name of the album “The BEATLES” in raised letters. Then came “Past Masters # 1 and # 2”, collections of songs released only in singles and other formats, considered as official discography, also without images of them!

More about the White Album here on this link

9. To know that “Let It Be” was not the last album recorded by the Beatles

Well, many think that the album released after the Beatles' formal end in April 1970 was the last one. NO! It was recorded before “Abbey Road”, in January 1969, but it was rejected !!!

A long story I told here on this link:

10. To know what was the biggest income tax rate in England at the time

George Harrison made a song for Revolver, called 'Taxman' and he saidLet me tell you how it will be

It's one for you, nineteen for me

This and other facts about “Revolver”, here, on this link

10 Master level points on link below!