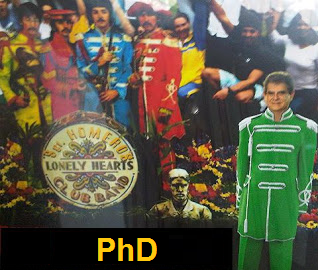 This is the third test on the topic!

If you know all 20,
(knew or learned)
and hit 5 of these new ones,
You take the title of Master!


21. To know which Beatle played for an American President

22. To know what 'Lost Weekend' meant for a Beatle

23. To know which Beatle was stabbed

24. To know which Beatle has blue eyes

25. To know which Beatle song is a Beethoven sonata in reverse

26. To know which Beatle has an unbeatable Guinness Record

27. To know what ‘Boleto Para Pasear’ means, or ‘Déjalo Ser’

28. To know when manager Brian Epstein first met The Beatles

29. To know what the movie 'Rosemary's Baby' has to do with The Beatles

30. To know where is the error in the sentence: “Frank Sinatra said that ‘Something’ is the most beautiful song composed by Lennon / McCartney'


21. To know which Beatle played for an American President


It was Paul, in 2010, when he was honored by Barack Obama for his legacy to English Language Music, and played, among others, "Michelle" looking at Michelle… Obama.

More about this memorable event here, on this  link


22. To know what 'Lost Weekend' meant for a Beatle


It was John, when Yoko ousted him in 1973. It was actually her plan to save the marriage: she gave John, as a gift, her secretary, the Chinese May Pang, and sent them both to spend some time in in Los Angeles, a period known as' The Lost Weekend ', so that he could satisfy his needs 'just' with her, like: 'Better be with you! ". The' weekend' lasted year and a half .. .

More about John's women here, on this  link


23. To know which Beatle was stabbed


It was George. On December 31, 1999, his home was invaded by a lunatic, George fought him, but ended up stabbed 10 times in a physical fight, one of the thrusts went to an inch from his heart, when Olivia appeared and hi the invader with a heavy lamp, saving his husband's life, even though she was also stabbed. Fortunately, George survived to record, and almost finish his last album, the magnificent Brainwashed.

More about George’s life here, in this link


24. To know which Beatle has blue eyes


It's Ringo, the only one of the four awarded with this pair of recessive genes with that very welcome lack of melanin

More about Ringo, here, at this link


25. To know which Beatle song is a Beethoven sonata in reverse


It's "Because", Abbey Road, 1969. Yoko was playing Sonata ao Luar on a piano when John asked her to play the chords backwards. There came the inspiration, then he amalgamated some poetic lyrics

Read about a wonderful interpretation of that song here, at this link


26. To know which Beatle has an unbeatable Guinness Record


It was Paul's, when 183,000 fans paid to see a solo artist show (this is the record standings). It was 1990 and it was the Maracanã Stadium. The record will never be broken because the largest stadium in the world has undergone renovations for the 2014 World Cup, chairs have been installed, so there are no more that grandstands  that allowed that accumulation of people side by side.

More about Paul's solo career here, at this link


In Argentina, and some other Spanish-speaking countries, there was a law that obliged the names of the songs to be translated into Spanish. So, we're talking about "Ticket To Ride" and "Let It Be".

Other pearls like this can be checked here, in this link


28. To know when manager Brian Epstein first met The Beatles


On a Wednesday, November 9, 1961, at noon, the Beatles, still without Ringo Starr, played one more of their daytime shows at the famous Cavern Club. In the audience, they were very young, but there was also an older guy in a suit !!! It was Brian Epstein. Brian had been convinced to see the performance of those guys, and that day, when he left his record store in Liverpool, before lunch, he stopped by to see what it was all about.

More about this event and another important one, here, in this link

29. To know what the movie "Rosemary's Baby" has to do with The Beatles


It is The Dakota Building, where John lived and died in New York City. It was also used as the scenario for the Devil's birth in the 1968 film "Rosemary's Baby".

More about this film, here, in this

30. To know where is the error in the sentence: "Sinatra said that ‘Something’ is the most beautiful song by Lennon/McCartney"


The mistake is on the authorship of the song. Yes, Sinatra, who recorded "Something", wanted to declare that it was the Beatles' most beautiful song and mentioned the author, in the easiest bet. Wrong bet! "Something" was a George Harrison composition for Abbey Road in 1969.

More about Abbey Road here, in this link