To be a Beatlemaniac is .... Full Professor 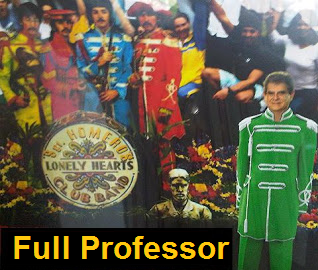 This is the fifth test on the topic!

If you know all 40,
(knew or learned)
and hit 5 of these new ones,
You take the title of Master!

42. To know how Mother Mary died

44. To know who had the nickname Lazarus in childhood

45. To know what 'traveling wilburys' means

47. To know how many holes it takes to fill the Albert Hall

48. To know how many songs the Beatles recorded

49. To know how John's mother died

50. To know a drawing painted and signed by the four Beatles

41. To know who Ivan Vaughan was


He was the one who provided the meeting between John and Paul, on July 6, 1957, in the courtyard of a Liverpool church. A mutual friend of the two, Ivan Vaughn, to whom we Beatlemaniacs are grateful for his passage through the land. John listened to Paul and his skills, he realized that he was a talent of equal magnitude, and after a night of debating with his immeasurable ego, he decided to admit him to the Quarrymen.

Text extracted from a post where I talk about origins of The Beatles, at this link

Paul and his brother Mike lived in a house with their father James, a cotton seller who, in his spare time, was an trumpetist in a jazz band, and was certainly a source of inspiration for Paul's musicality. Their mother, Mary, a public service nurse, had died six years earlier (1956), to  breast cancer. Paul paid tribute to him in “Let It Be”, invoking his presence in difficult moments (‘... Mother Mary comes to me, speaking words of wisdom ...’). There was always a rumor that the aforementioned Mary was referring to marijuana, however, I do not believe Paul would play with his mother's name.

This text finishes a post where I talk about a great album of him, in this
link

Paul adopted the drug as a mental inspirer. Take a look at the lyrics: he seems to be grateful to have found someone who changed his life, but in fact, that ‘someONE’ is marijuana! It starts with ‘I was alone, I took a ride, I didn’t know what I would find there. Another road where maybe I could see another kind of mind there!’, And ends by asking ‘What are you doing to my life?’. I only understood this when I read an tale of himself in the book “Many Years From Now”, of his authorship.

Text extracted from a post where I speak of Paul's solo career, in this link


44. To know who had the nickname Lazarus in childhood


It was Ringo! As soon as he was 7, Ringo had an appendicitis that evolved to a peritonitis that left him in a coma for 15 days, to death, and forced him to stay in the hospital for a whole year, delaying his learning. A neighbor of the family tutored him twice a week, he learned well, almost reached the level of the others, but at the age of 13, tuberculosis came to him, which interned him in a sanatorium for another two years !!! Wow!! His friends nicknamed him Lazarus!

More about Ringo in this link


45. To know what 'traveling wilburys' means


George formed friendships (many) in the world of music and outside it, and set up with some special friends the 'Travelling Wilburys' between 1988 tha1990, that was soon called a 'super-band'. See the cast who joined George: Tom Petty, a hit maker with his band Heartbreakers, Jeff Lynne, of the Electric Light Orchestra, Roy Orbison, who was already successful before The Beatles, who even opened shows for his band (it's his  the huge hit 'Pretty Woman'), and the one and only Bob Dylan, who needs no introduction.


This is an excerpt from a post of mine about George's solo career, which is in this link


His name is Richard Porter

In April 2005, I made one of the most famous London Walks, which is led by him, who has the title “Beatles Brain of Britain” due to his expertise. Me and about 15 other people, from 8 to 70 years old (the older lady usually delayed our walk) walked through several important London spots in beatle history.

I tell you about this tour in this post .


47. To know how many holes it takes to fill the Albert Hall


I saw two shows at Albert Hall (Eric Clapton and Australian Pink Floyd), that theater where 4,000 holes fit, as the beatle song "A Day in the Life" tells:

And though the holes was rather small, they had to count them all!

Now, they know how many holes it takes to fill the Albert Hall

In this link, I comment on it and other points of London


48. To know how many songs the Beatles recorded

And I heard and sang and danced 50 of them at a night barbecue cparty in 2007, animated by the exceptional cover band BlackBird.

I tell you about that setlist here, in this link

49. To know how John's mother died


Julia was his mother, a little bit crazy. She left him to be raised by his sister Mimi, went out into the world, but came back and they were best friends, she even taught John to play the banjo. Everything was doing fine, until fate hit the boy hard: in July,1958, when she was crossing the street from her sister's house to catch a bus, Julia was run over by a drunk off-duty police officer, being launched at 10 meters away, and instantly dying, at the age of 44.

More about John's life at this link


50. To know a drawing painted and signed by the four Beatles

For security reasons, they had to stay at the hotel all the time. Brian Eptein provided brushes and paints, placed a canvas on a coffee table and a round lamp to hold it. At the end of the mission, they signed at the center and presented it to a Japanese fan club. The drawing was forgotten for decades, and a few years ago, it was auctioned for £ 350k.

See the whole history, in this link!

And I leave the drawing here, to finish this test 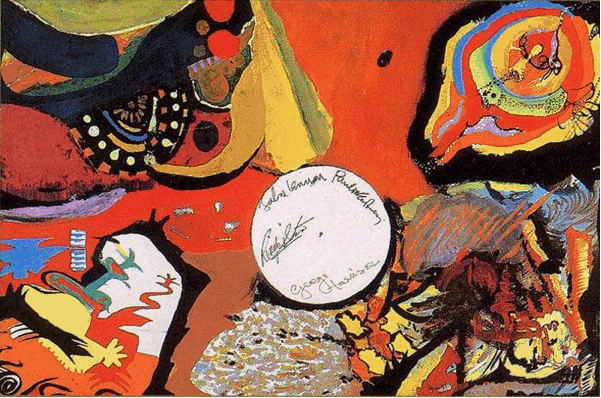