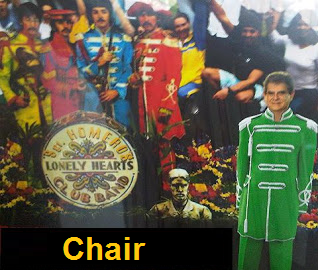 This is the fourth test on the topic!

If you know all 30,
(knew or learned)
and hit 5 of these new ones,
You take the title of Master!


51. To know which Beatle song was played live for a Space Station

52. To know who hailed Eric Clapton for his 'Psycho' Guitar

53. To know which Beatle song had the only triple guitar duel

54. To know which Oscar-winning actor appeared in Concert for George

55. To know which Head of State was in the crowd to see Paul up close

56. To know the original name of the song Jealous Guy

57. To know how Paul named the grasshopper on his shoulder, at a concert in Brazil

58. To know which US locations appear in Beatles songs

59. To know which is the only single from John to reach #1 on the American charts

60. To know who created the name of the song, LP and movie A Hard Day's Night

51. To know which Beatle song was played live for a Space Station

Once again, Paul participates in a “For the first time ...” issue: in one of the venues of the US Tour, in Annaheim, California, Paul and his band woke up the astronauts of the International Space Station for the first time with a live performance. Usually, astronauts are awakened by recorded music. The chosen songs were "English Tea" and "Good Day Sunshine", the latter from "Revolver", very appropriate for those who are waking up with the sunlight hitting their eyes, like no other human being can appreciate. I saw the scene: up there, two astronauts, an American, doing zero-gravity pirouettes of happiness, next to a Russian man who seemed not to be understanding what was going on.

More on Paul's solo career on this link

52. To know who hailed  Eric Clapton for his 'Psycho' Guitar

It was George, at the show he did live at Budokan Hall, in Tokyo, 1992. Here, an excerpt from my post about the event:

"Now, in terms of music, Eric's presence, always noted on the other tracks, reaches its maximum here, with another solo show, reissuing the anthological interpretation he offered back in 1968, invited by his friend George to participate in the official beatle recording of 'While My Guitar Gently Wheeps', something that few mortals have ever achieved in history. Never has a guitar cried as much as that night in Tokyo, to really  make cry any fan of the instrument. His performance receives, in the end, the most appropriate qualification I've ever heard about him, from his host George: 'Eric Clapton and his Psycho guitar'. "

Here, the link for the post on the Show.

53. To know which Beatle song had the only triple guitar duel

It was on "The End", Abbey Road, the last recorded by the Beatles, and punctuated by several 'first times'. It was the first and only time that there was a duel of solo guitars, between John, Paul and George, masterful.

More on Abbey Road, here on this link!

54. To know which Oscar-winning actor appeared in Concert for George

It's Tom Hanks and there was also the whole Monthy Python group, all great friends of George, an incredible human figure, making several very funny sketches, with the right to show their respective asses in a solemn moment.

Here is link,  describing this show, best DVD I have on my shelf.

55. To know which Head of State was in the crowd to see Paul up close

Here is an excerpt from my review:

"Paul was received with honors of Head of State (or almost) by then President Putin and Perestroika architect Mikhail Gorbachev!! Another great moment of the show, by the way, is when Putin arrives at Red Square to watch the show, from the crowd, surrounded by bodyguards, and asking them to stop paying attention to him, and to direct the honors to the star, who sang 'Calico Skies'. Paul notices the arrival, and when he finishes the song, he thanks for the 'Important Arrivals'. "

Here, on this link, my full review.

56. To know the original name of the song Jealous Guy

It is "Child of Nature", which also had another letter, inspired by the place where the Beatles were (India) and what they were doing (Transcendental Meditation), when John composed it!! In the LP Imagine version, "Jealous Guy", is a love song, magnificent ballad! And it was immortalized in a spectacular clip that made it to the movies, with John and Yoko on an idyllic tour of their London estate.

More about other songs from that trip here, at this link.

57. To know how Paul named the grasshopper on his shoulder, at a concert in Brazil

He named it Harold! Paul handled, with great professionalism, the occurrence of a locust cloud in Goiânia, 2013. See his savoir-faire!

"We're having fun with the locusts, huh?", He generalized before introducing the audience to the most insistent greenish being, who remained static on his right shoulder throughout several songs. “This is Harold. Say hi to the people!”, joked the star, who never made any effort to avoid such an  'attack'.”

More about the show, on this link!

58. To know which US locations appear in Beatles songs

(*) It is not specific where John got this vocal to put in Revolution 9, but as there are several cities with the name in the USA, I decided to put it there!

I made a survey of ALL the times that the Beatles refer to localities, be it streets, cities, states, mountains, countries. Here, on this link, all occurrences.

59. To know which is the only single from John to reach #1 on the American charts

It was "Whatever Gets You Thru The Night". John Lennon had only one #1, and it was only in 1974, with that song! Hey, where's "Imagine"? Well, the great anthem for Peace only reached N ° 3 in 1971. And his single N ° 1 came in a bet with Elton John, who was sure of success and demanded that, if it were achieved, John would go up on stage with him to to celebrate. And it did. And it went up. And it ended up being John Lennon's last live appearance in his life, on November 28, 1974, months before retiring to take care of his son!

Here more about the Beatles' solo careers, in this link

60. To know who created the name of the song, LP and movie A Hard Day's Night

When shooting the first Beatles film, 1964, still without a name, a tiring day, the night comes, Ringo sits in one of those Director's chairs and says to the others: "It’s been a hard day’s night ...". John, who was distracted, listened to it, looked at Paul, and said, "That’s the name!". And then he went home and composed the song, which Paul later complemented, and it became the name of the album and of the film.

More on Ringo, here on this link! In Engliiiiish!!